It’s already a while ago that we spoke to Alexandra Crockett, the woman behind one of the most ingenious, outstanding and, well, wacky book projects we ever came across. Her „Metaldudes Cats Book“ will be out in 2014, and what can we expect? Basically, the title says it all – we get pictures of cute (?) metal dudes mostly from US West Coast bands cuddling with their cute (!) cats. Brillant. And even more so: Once published, proceeds from the book will go toward no-kill cat shelters along the West Coast. Let’s see what Alexandra had to say about this remarkable project of hers. 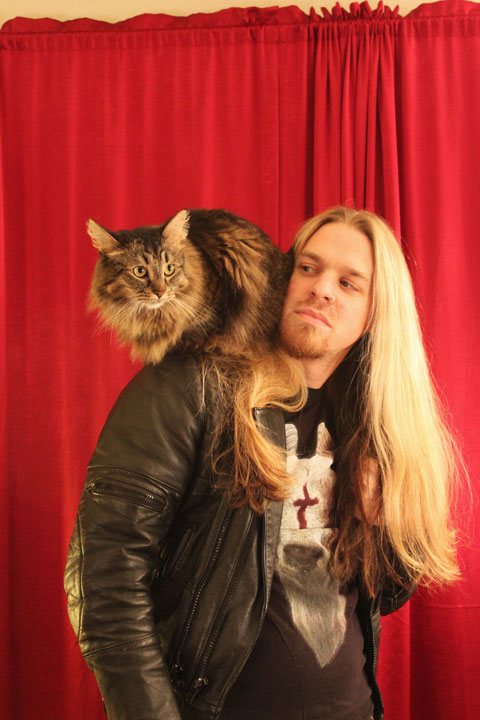 – How did you find the people who contributed to the book?
I began by texting about 30 of my friends in the metal scene, and from there word spread by way of these first contacts, myself, the internet, and metal shows. I had a benefit show early on in LA, when I had first moved down there, so that got me some attention as well. Mainly I think it was the fact that the entire worldwide metal scene is pretty connected. Either you know a person directly or you have at least one friend in common, so it goes from there.

– How did people react to your request? Was it mostly „excitement and delight“ or were there also people who rejected the idea, and if so, for what reasons?
Nearly everyone I have ever spoken to about the project has been incredibly stoked on it. Of course, there have been a couple people who rejected the idea, either because they don’t have a cat or because they felt that the imagery in the book somehow made their band less „brutal“. I actually thought that was pretty funny because if you can’t admit you like cats (which the few people who reacted this way had multiple cats themselves), what makes you a true metalhead or person anyways? There’s nothing „brutal“ about taking on a persona you don’t actually embody just for image.

– Did you organize photo shoots or did the project basically rely on contributions people sent to you?
Yes, I did organize photoshoots. I did over 110 shoots, which are the main works seen in the book. I received about 500 submissions beyond that, many of which will also be featured in print. 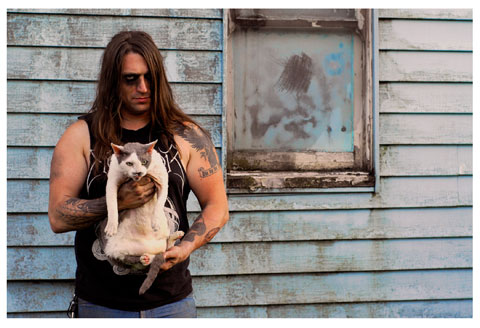 – The project concentrates on US West Coast bands. Is that mainly due to your origin and your own connections to the scene or is there another reason?
I am, in fact, not from the West Coast. I grew up in New Jersey and moved over this way when I was around 13. The reasoning behind the project sticking to the West Coast is definitely because of my current location. I started the project when I was living in Seattle, and then once I moved to LA, I did a ton of photoshoots in LA and the Bay Area.

– Do you think the outcome would have been very different if you had started the project in any other part of the States or even in Europe?
I don’t think that the outcome would have been much different. I have submissions from all over the US, Europe, even Australia. The outcome, to me, is much more reliant upon the strength of the imagery one is capturing as well as who you know and how deep you are in a scene. I happened to have some pretty solid ties with alot of musicians and metal fans when I began, so that is probably what influenced the outcome the most.

– Please name a few of the bands whose members have been involved so far.
Well, that list could go on for a very long time. Here are a few that I photographed myself: Poison Idea, Holy Grail, Occult SS, Man Is the Bastard, Caligula Cartel, Atriarch, Ghoul, Dystopia, Noothgrush, Countdown to Armageddon, PDP, Lightning Swords of Death, Sacrificial Slaughter, Gitane Demone, Isis, Black Goat, Book of Black Earth, Thrones, Melvins, Akimbo, Anhedonist, Exhumed, Murder Construct, Ludicra, Nausea, Impaled, Phobia, Winterthrall, Cattle Decapitation. This list doesn’t include any of the multitudes of other bands that submitted photos, such as Napalm Death, Morbid Angel, Municipal Waste, Skeletonwitch and Evoken. 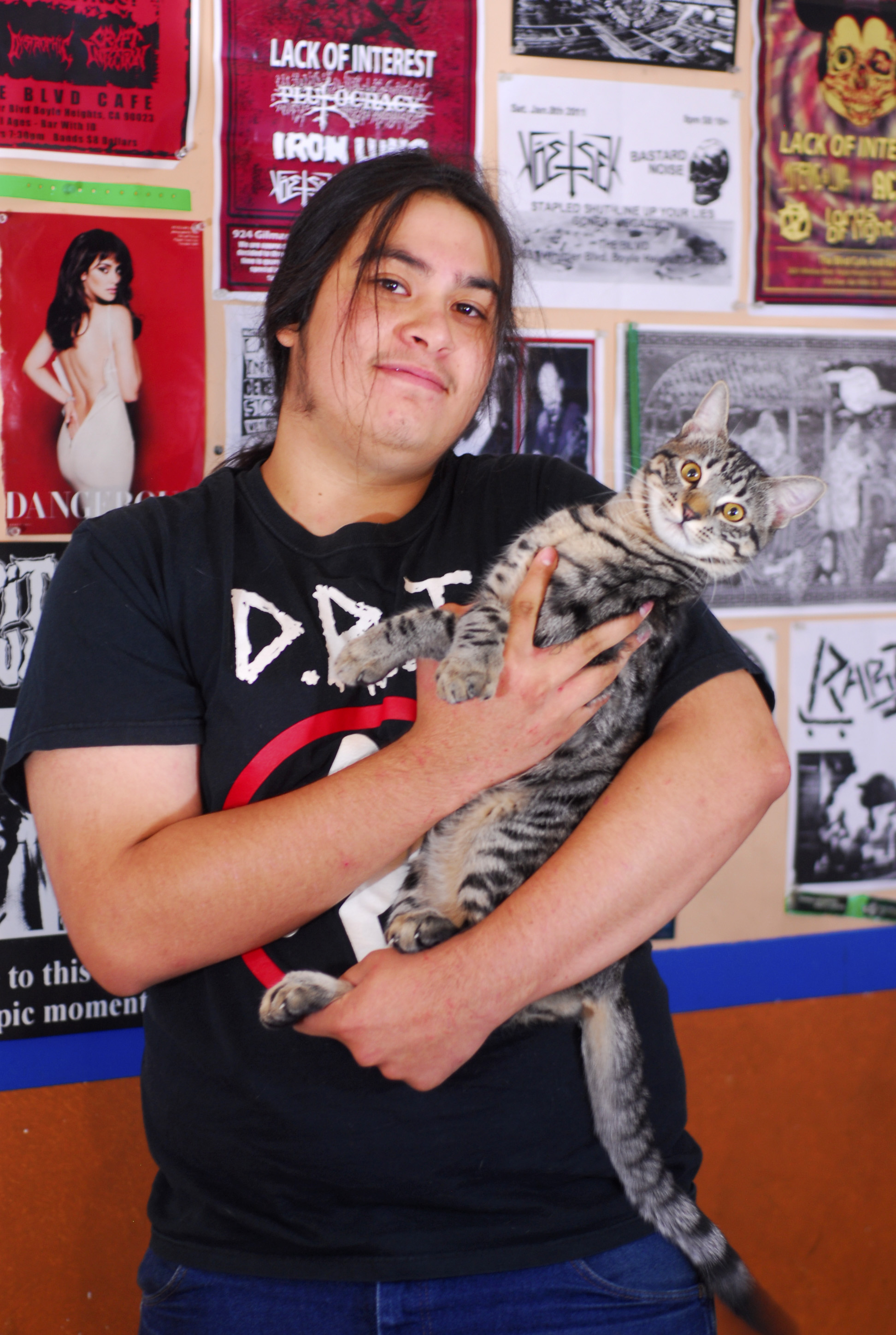 – The visual side of metal strongly builds on images of masculinity that are often very exaggerated. Did you somehow take that into consideration, did you want to counterbalance this image or put it into question?
I did take that into consideration quite a bit. I think that metal music certainly masculinizes many things. I believe that everything, including in nature and the animal world, has an equal amount of masculine and feminine attributes. I could probably write a book on my feelings about gender roles, so I’ll keep it simple. I felt that the strong imagery of these pretty tough-looking, tattooed, and brutal guys was a fantastic juxtaposition against the imagery of soft cuddly animals (that you know are also pretty tough and brutal!). I think the juxtapositioning absolutely puts into question what is masculinity. What does it mean, what is it’s place, what makes a man, etc.

– The icon of metal is a dude, who in your project is ironically commented upon by your portraits, which play with the expectations of the beholder. Could you think of a similar project that focuses on the (visual) role of women in metal? Or are “female images” not yet established enough to be ironically commented upon?
I’m not sure that „female images“ are established much at all, beyond that of sexual symbols in the scene. There is still a huge place for feminism in our society here in the US, because honestly women continue to be seen as lesser and weaker. While this condition has improved a bit since women’s liberation, it’s certainly at no ideal point today. I do aspire to have my second project include women in the metal scene, this is something that has been begged of me since the start. Where the current publication goes will determine my ability to do a second edition including my femme sisters. I hope it happens! 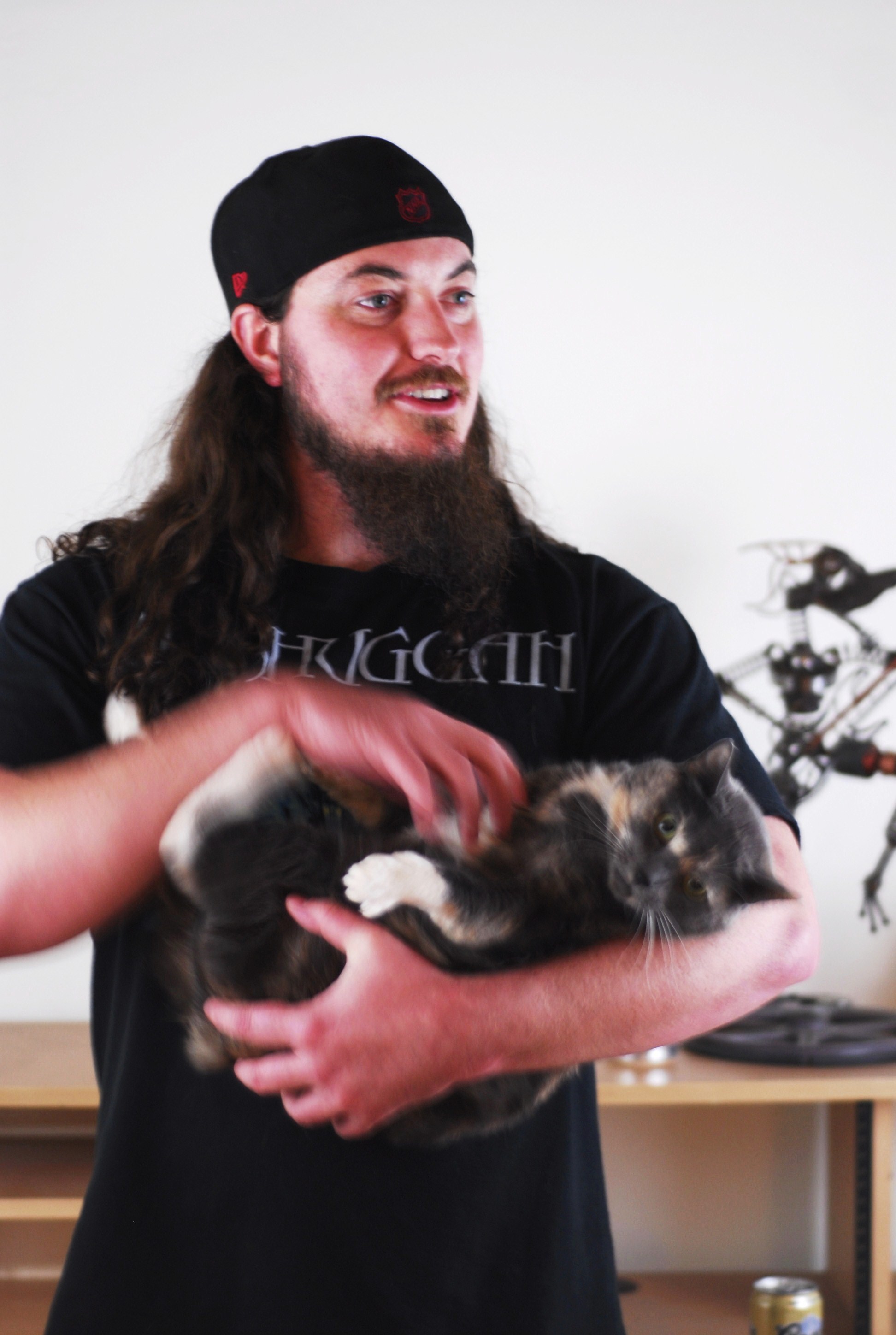 – Why cats? Why not dogs?
My overall feeling on this question is that metalheads like cats and punks like dogs. This is, of course, sometimes not true, but I’d say that overall I’ve seen this to be the case. I’m not sure if I could fully explain why.

– How about funding the book – you launched a crowdfunding campaign on the internet and also set up two benefit shows. Have you reached the point where you are able to finance printing and publishing the book?
I did do crowdfunding, as well as three benefit shows for the publishing. However, directly after my last show, I was approached by a publisher and given a book deal! So I am now able to use the funding I received prior towards no-kill shelter donations.

– When will the book be published, and will it be available in Europe as well?
The book should be coming out early 2014, or so my publisher tells me. They are in posession of the second edit at this point, so most of the control is now in their hands. I do believe it will be available all over, including in Europe. If anything, I will make sure it is available to whoever is interested, either via the internet or otherwise.

– Last words?
I want to really thank you for such well thought out questions. Most interviews ask me pretty much the same things, which is great for promotional purposes, but I enjoyed your interview style. Beyond that, I am very excited to present you with the finished work in 2014! I can’t wait to be able to start donating more towards no-kill shelters from any proceeds brought in. 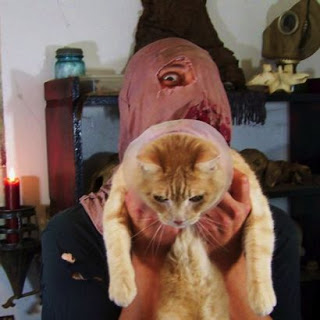