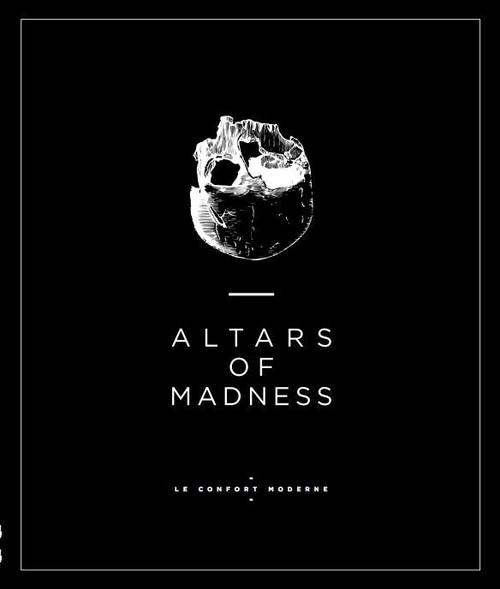 Altars of Madness is not only the title of Morbid Angel’s legendary debut, it is also the name of a very remarkable exhibition, curated by Damien Deroubaix and Jérôme Lefèvre, editors of C.S. (Conservative Shithead) Journal, a fanzine “in which they explore the influences of metal in contemporary art.” The exhibition’s goal now was to transfer this attempt from paper into the world of three dimensions: To explore how extreme metal – especially in its blacker shades – has influenced contemporary fine art.

Altars of Madness was on display twice: In the Casino Luxembourg – Forum d’art contemporain from May 18th to September 15th 2013 and in France at Le Confort Moderne in Poitiers from September 28th to December 15th 2013.

Those who did not make it to either of the two places can truly be grateful for the publication at hand. The two volumes are beautifully made, the rough cardboard covers in black and white have a very nice feel to them, and the format is big enough to give both texts and images enough room to breathe, but still compact and light enough to be easy to handle.

Introductory texts by the curators and other experts on the field of metal-inspired art give a short glimpse into the history of the genre’s genesis. At the same they establish and explain the links between metal and visual art. At times these links seem a bit forced – sure, in retrospect similarities between the concept of inaesthetics and radicalism in the writings of the Marquis de Sade and the extremeness of metal can be constructed, yet in this context the combination of the two seems to try and justify the whole idea of presenting metal in a highbrow art context. Nevertheless, the interactions identified and conclusions drawn here are both striking and revealing. 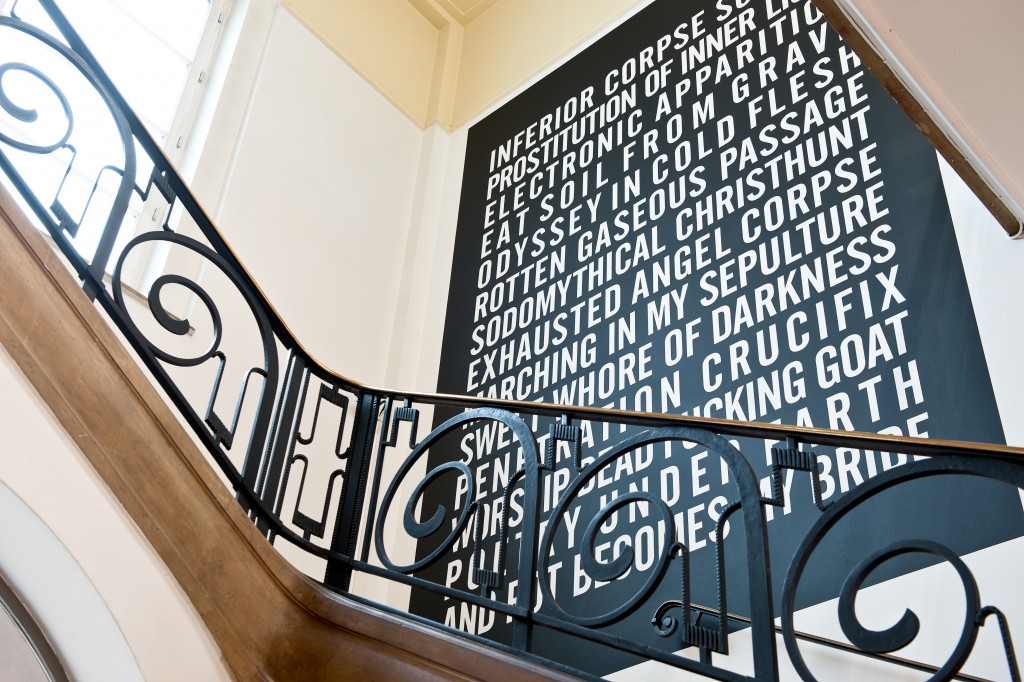 The exhibition presented “extreme metal” as a threefold entity, roughly divided into Grindcore, Death Metal and Black Metal: Pieces by Nicolas Bullen (founding member of Napalm Death) literally visualise the manifold links between Grindcore and visual art – a garden shed transformed into an anarchist’s armoury by filling it to the brim with lovingly made Molotov cocktails reminds of the potential for violence and destruction underneath the surface of a seemingly “functioning” society – a motif one finds again and again in Grindcore lyrics and imagery.

On the Death Metal side of things, famous record covers are brought into their (artistic) contexts (only to mention Dan Seagrave’s artwork for Morbid Angel’s “Altars of Madness”) while Steven Shearer’s oil paintings and pencil sketches capture the youthful anger and energy of the “scene” –irreplaceable driving forces behind Death Metal.

Black Metal in all its dark and awe-inspiring glory dominates the third part, and it seems as if Black Metal – already rich in symbols and visual codes – has the most enticing appeal of the three ugly siblings. At the same time, it is the most difficult to transpose into another medium without losing touch with the original inspiration – what does the “uninitiated” visitor make of Élodie Lesourd’s Vargsmål, an acrylic painting which depicts the charred skeleton of a burned down stave church, while at the same time being a quote of Banks Violette’s installation Untitled (Church), which in turn is a reference to the cover of Burzum’s Aske?

It is obviously very easy to get lost in a tangled web of citations, hints and cross references – no small wonder that both the exhibition and the catalogue have a strong liking for maps – we find a “Grindcore Family Tree” by Mick Harris, a “Black Metal Family Tree” by Fenriz (complete with “mouth tobacco stains”) and an “Extreme Metal Concepts Diagram” by Jêrome Lefèvre and Max Loriot.

After the preliminary text section, both volumes contain huge image-laden chapters: The first volume presents all exhibits sorted by artists, while the second delivers “Exhibition views” both from Luxembourg and Poitiers. The atmospheric photographs manage to transport the somewhat eerie and uneasy atmosphere that must have been prevalent at both places. The two volumes suffice well enough to give a very good impression of what it must have been like to stroll through either the Casino or the Confort moderne and to get sucked into or appalled by the visual interpretation of extreme metal.
A special feature of the second volume is the fanzine section, where excerpts from early issues of important DIY media like Slayer, Battlefield and Chainsaw Abortions are reprinted, to give an impression of the “cut and paste”-aesthetics of the early underground scene(s).

The question remains if extreme metal needs this kind of supplement to be understood, or, even more intricate, if visual art at all can do anything to explain the fascination of the music it tries to render into another kind of medium. It is hard to tell what exactly the exhibition aimed at – presenting metal as an art form, especially to an audience which is not yet familiar with the music? Or rather pick up on the mutual fascination of fans and curators and to give the already initiated an opportunity to revel with their eyes in what usually is perceived by their ears only?

Anyway, the dark force that drives musicians and visual artists alike is clearly tangible, even if the clash between extreme metal and the academic, educated environment of Altars of Madness culminates in the over-correctness of the volumes’ proof reader: Who if not a novice to the cult would have corrected “Dying Fetus” to “Dying Foetus”?*

For sure, the “established” world of art is not where extreme metal takes place – but it can be a mirror, wherein the horrors which inspire the music are reflected and multiplied. The exhibition catalogue gives a very good impression of this endeavour. Recommended.

You could get it here 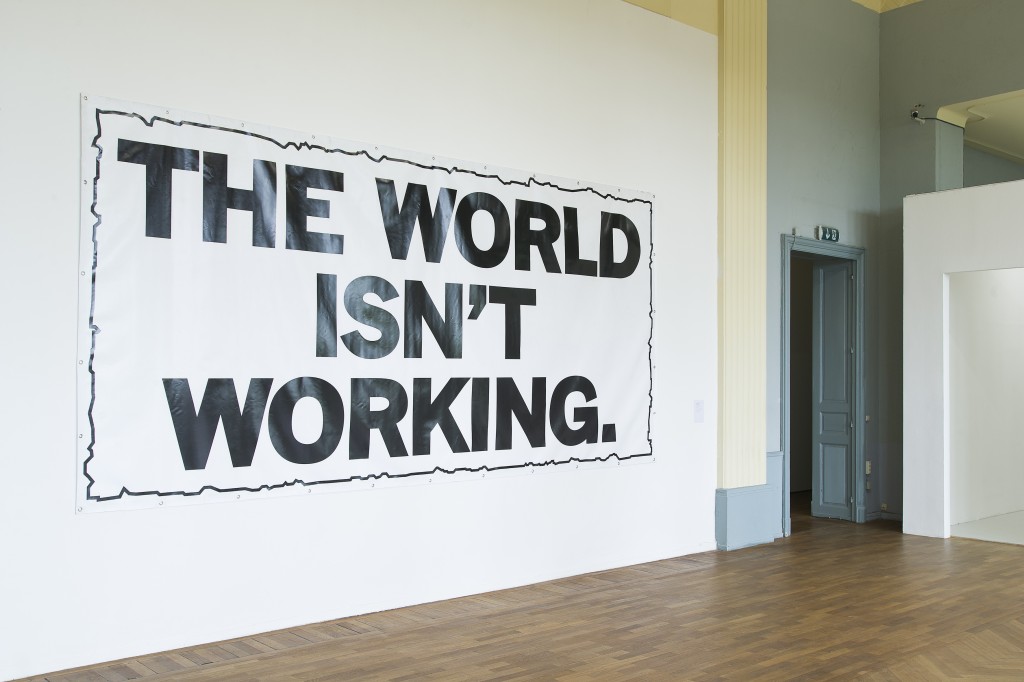