Sharon Ehman is the woman behind TOXIC VISION, where metal is transferred from one sphere into another: Passing through Sharon’s gifted hands, aural emanations are brought into a visual, touchable, and very wearable form. Sharon, who worked with and for bands such as Watain, Turisas, Behemoth, took the time to answer a couple of questions for us. 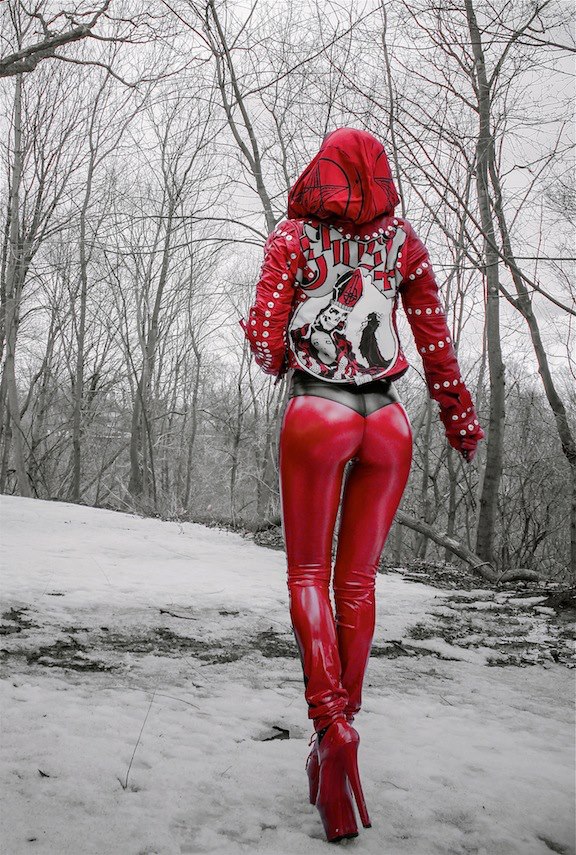 1. How and what age did you first get into contact with the metal scene?

Sharon: I grew up in the countryside of middle Canada – completely surrounded by the boreal forest, without an internet connection and two television channels. Music never played a significant role in my childhood. Really, the only memories I can recall are visiting my grandparent’s farm which was quite a magical place, a true passage into the past, where on occasion my grandfather would take out his steel guitar, put on his metal finger picks and play something for all the curious grandchildren gathered around. I am grateful for this type of ’seclusion‘ in earlier years – in some ways now, finding this music has helped me to carve this path even deeper. It hit me like a truck. I find music often helps define an individual, and sometimes it is so much more than just mere entertainment. It enchants you – it infects you, it ignites a flame and feeds a beast that dwells inside. Whatever the path is that leads a person to such things as identifying with a certain type of music – it becomes a part of them, and to me this is a very important thread in this intricate web.

2. You are still quite young, how long have you been into designing?

Sharon: ‚Designing‘ clothing always seems like such a simplistic term, I’ve never really considered myself a ‚designer‘ – I think I would prefer ‚builder‘, or ‚crafter‘. There are so many different elements that go into this – especially when you take care of every detail on your own. I like laying down to rest at the end of the night – after uncharted hours of toiling away in my workshop – the floors vibrating from the sewing machines and layers of the concrete floor peeling away from the constant barrage of sparks and molten metal shards being blasted only a few inches away. Waking up with paint-stained hands, bruised from metal prongs being thrust through leather for days on end…only to leave this environment to wander off in search of an appropriate spot to document the spoils of all of this madness. And in return, releasing another creation into this world – something that previously did not exist… 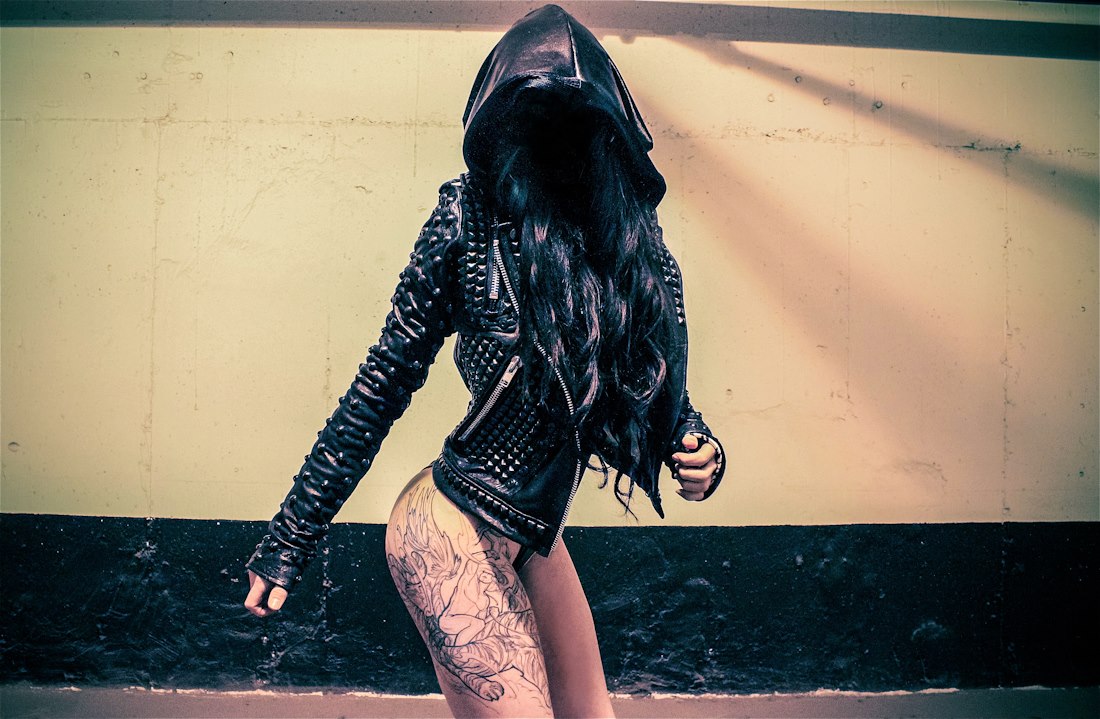 3. What was the initial event or idea that got you into altering and designing ‚metalized‘ fashion?

Sharon: I am not sure if its so much intentional as it is natural to design these types of things – based on the importance of music and brief explanation of my childhood years mentioned in the first questions of this interview. I guess it is natural to identify studs and leather in a ‚metalized‘ format. From a different standpoint – the use of band shirts, music oriented imagery etc… I care so much about the music that I listen to – and it makes me happy to know that I can mesh these elements together into my creations – in hopes of influencing, exposing and steering people towards (in my opinion) great music, and in return perhaps this music can enchant people on their own creative path in some of the ways that it has for me.

4.Was it your aim from the start to sell your clothing?

Sharon: I’ve never really approached Toxic Vision from a business standpoint – things have always been more fluid – this path has always felt a bit more primal or second nature. It is not what I do, it is who I am. Centuries ago – people would step into the colosseum, there were many seats for the spectators and just a few would fight. What would these spectators receive? A short thrill before carrying about their day. But the gladiators- through dedication, hunger for something more, and a life committed to victory – they fought for their lives. You either lived or died, never a life to simply just exist… 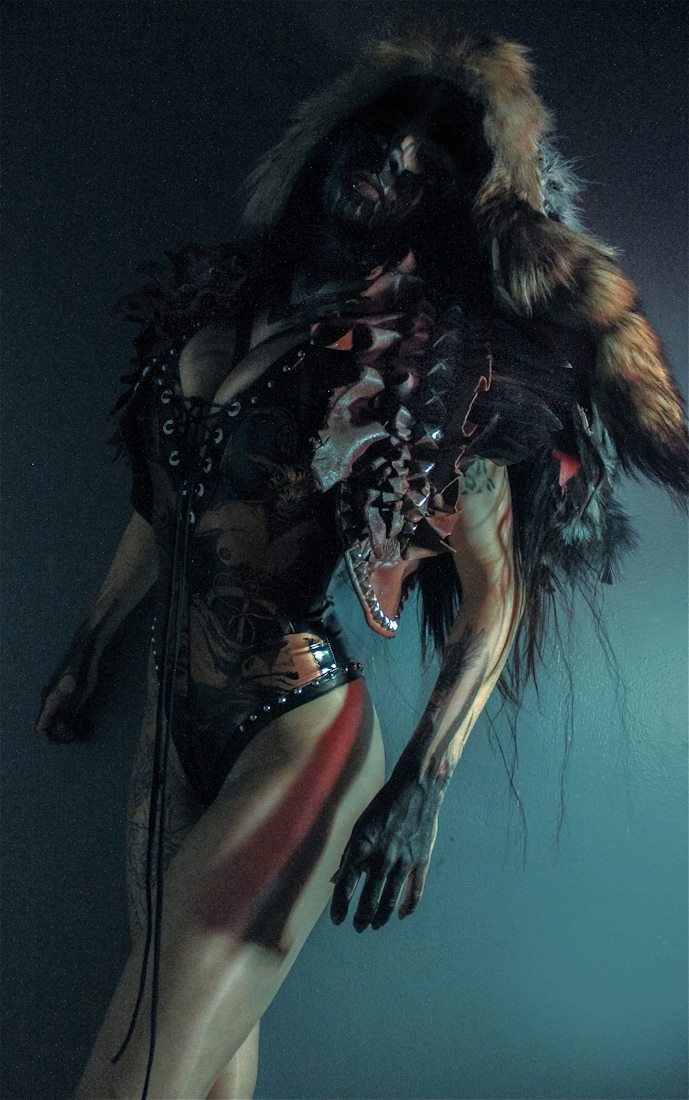 5. Do you have any connections to the world of mainstream fashion or do you get most of your inspiration from the metal scene?

Sharon: I really don’t think too much about the ‚fashion world‘, I don’t like the idea of finding inspiration in things that presently exist – it feels tainted in a way – that was someone else’s vision. My influence from music is a bit more abstract, I like to dance through dreamland… occasionally carrying bits and pieces of that world into this concious one. I think that a constant hunger for progression thrusts a person into finding inspiration that reaches much further than what would typically meet the eye…

6. Please name your favourite bands and tell how they inspire you.

Sharon: There are some things better left unsaid, and some things that just simply cannot be put into words…. For anyone familiar with my work, they know where my loyalties lie. 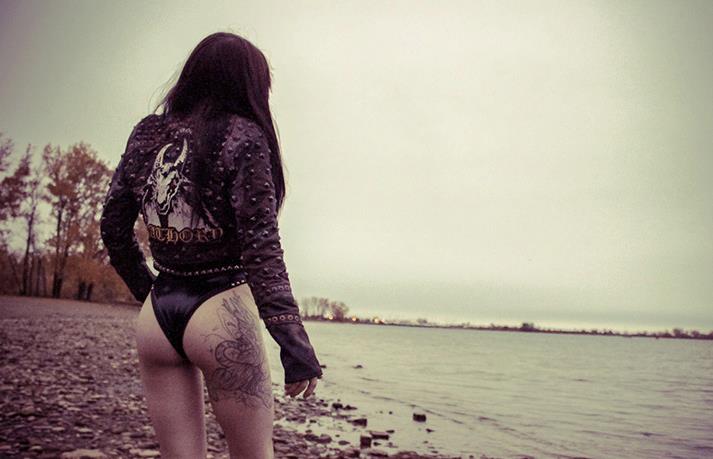 7. You are working with a lot of bands, creating outfits for them, etc. Do they usually hand in some ready made concept or do you present your own ideas?

Sharon: Some of the bands I have worked with may never know just how important our encounter and collaboration has become in the progression of my skill and craft. Every experience is different – but one thing is constant – the careful selection of the bands that I choose to work with lies on a feeling that another torch along the path will be lit. It is a very powerful thing when multiple creative minds in the same realm come together to define a vision and allow it to manifest in such a way. I am very grateful for such encounters…

8. From your point of view – what role do fashion and style play for a scene like heavy metal?

Sharon: True artistic expression knows no boundaries. I think it is very important for any artist to never limit themselves in any way – and every aspect of what they thrust out into this world should reflect what they are feeling inside. To me, it only makes sense to project your intentions visually. 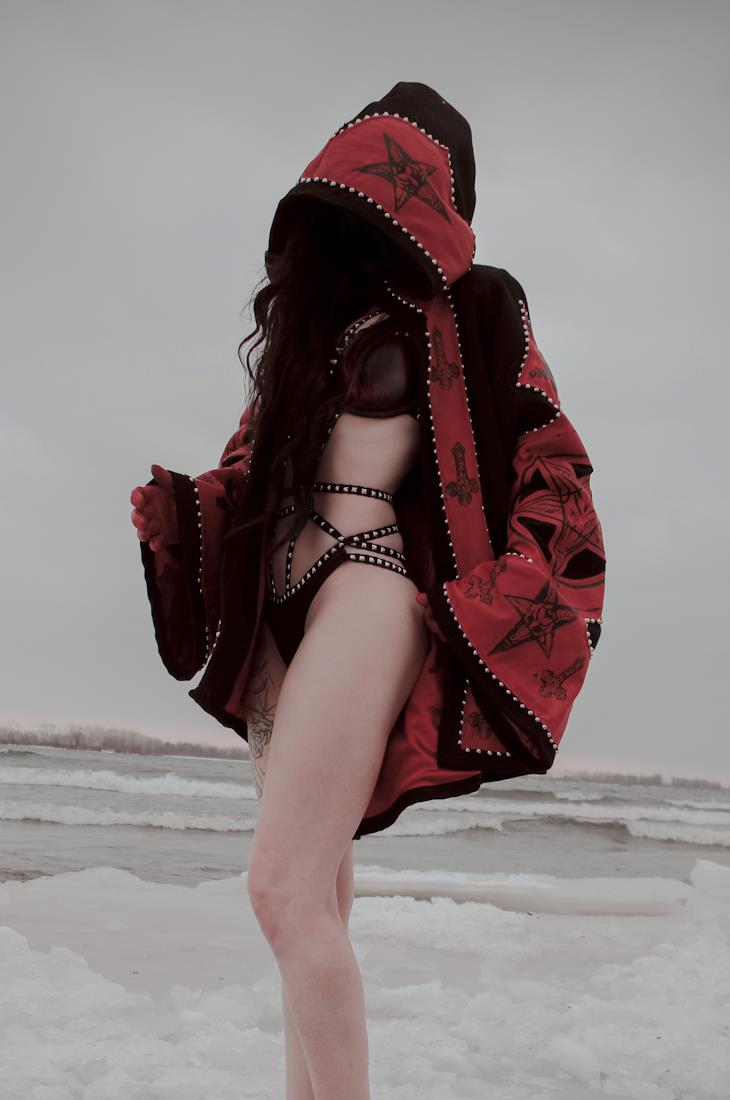 9. You have been to Europe many times, what kind of differences do you see when you compare the North American and European metal scene?

Sharon: I think that no matter where you go on this earth, there is a certain ‚brotherhood/sisterhood‘ connected with heavy metal that brings everyone together, border lines erased. However… based on social structure, media influence and general state of conditions in certain parts of the world I do notice some differences in… the word that comes to mind is – severity. However… getting in depth about this subject would make this interview very very long…

10. Are there also significant differences in the way people dress, and are there clearly shaped styles?

Sharon: Going back to your previous question – I would like to think that the way people dress is an expression of their own will and has nothing to do with the people around them.. 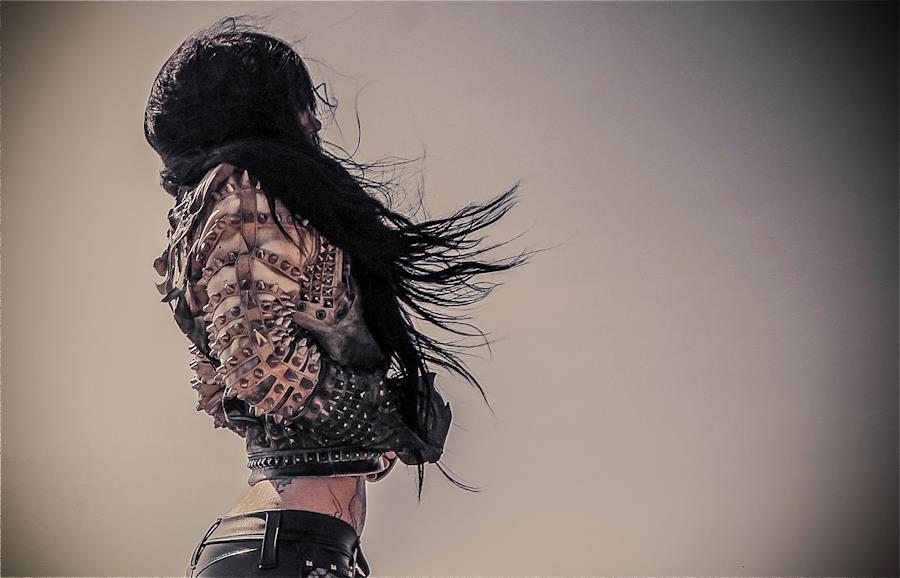 11. Sometimes elements from real „scene styles“ leak into mainstream fashion, like rivets, skulls or even band shirts. What do you think of this?

Sharon: The simple answer is – I don’t think too much about this, it is quite irrelevant to anything I am involved with. I like to keep my focus inward – people can do as they please and the sheep will always need a new field to graze in… it won’t affect my path.

12. Your designs are always extremely sexy; is that an indispensable part of dressing as a female metalhead?

Sharon: In my world I put the ‚female metalhead‘ aspect aside, as I don’t see much relevance to that, or maybe I have a problem with all of these labels people like to put on each other. In regards to my designs, I am ok with being a bit obtrusive, I want to shove it down people’s throats. What is sexy? Confidence is sexy, intelligence is libidinous, fearlessness is hot, why not have clothing to match? 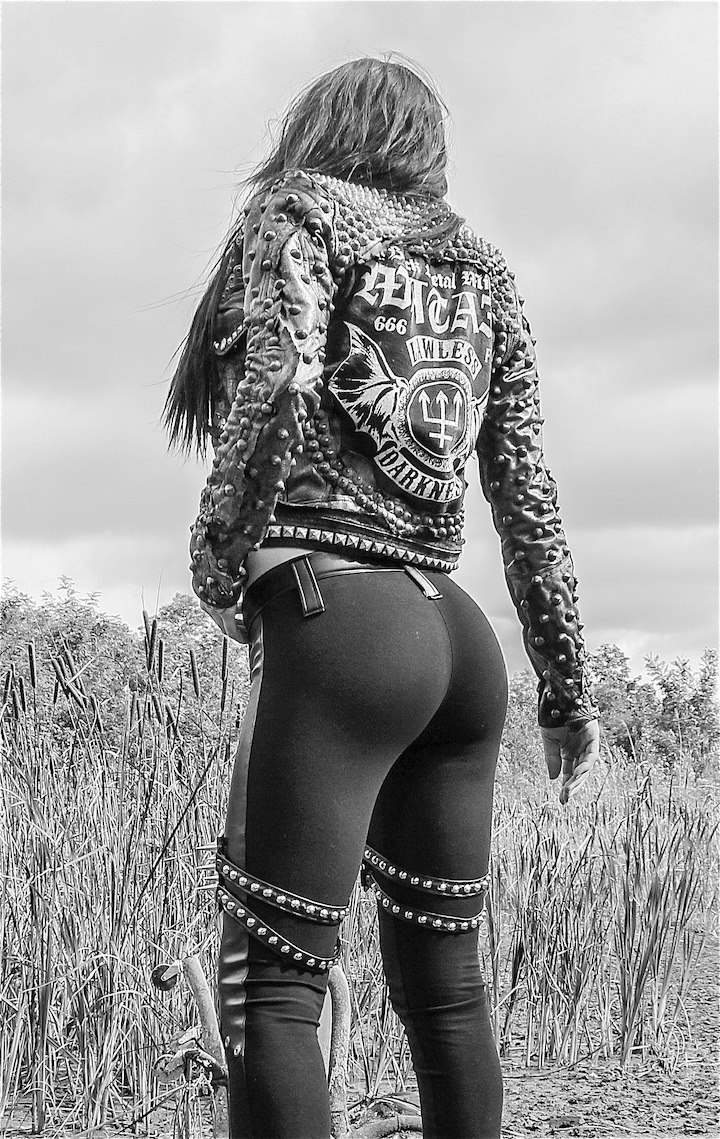 13. Could you imagine creating neutral or un-sexy clothing?

Sharon: Sure, I do all of the time. I don’t think the ’sexiness‘ attached to this really has much to do with the clothing rather than the person who is wearing them. However, I would hope that the same feelings I have projected in creating these garments speaks through the designs themselves. I would like to think there is a certain kind of strength and power attached to wearing these kinds of things. When I think about my ‚diehards‘ – this group of women who have been long-time Toxic Vision supporters – this is exactly what they evoke. It makes me pleased to know that my core group of supporters are powerful women – leaders within their tribes…

14. What is your future vision for Toxic Vision? Are you growing into a proper business, employing people to help you or do you want to stay underground?

Sharon: This seems to be the question on everyone’s mind. I believe it is possible to be an unstoppable force on your own. Singularly as one and the power that can hold, both internally and externally. When I think of myself and Toxic Vision – I imagine the head of a beast, tilted back and spewing black smoke from the mouth, through the nostrils, escaping from the eyes and ears as if this certain kind of demon is being expelled into this world. And in return bringing momentary calm and solace. The restless mind constantly feeds the beast, so smoke continuously spews, sometimes rising high in the sky and sometimes spreading a dark, thick blanket creeping along the ground, pushing through every crack under the door, getting caught in people’s throats and infecting their lungs.………Once the torch has been lit – it is impossible to snuff it out. 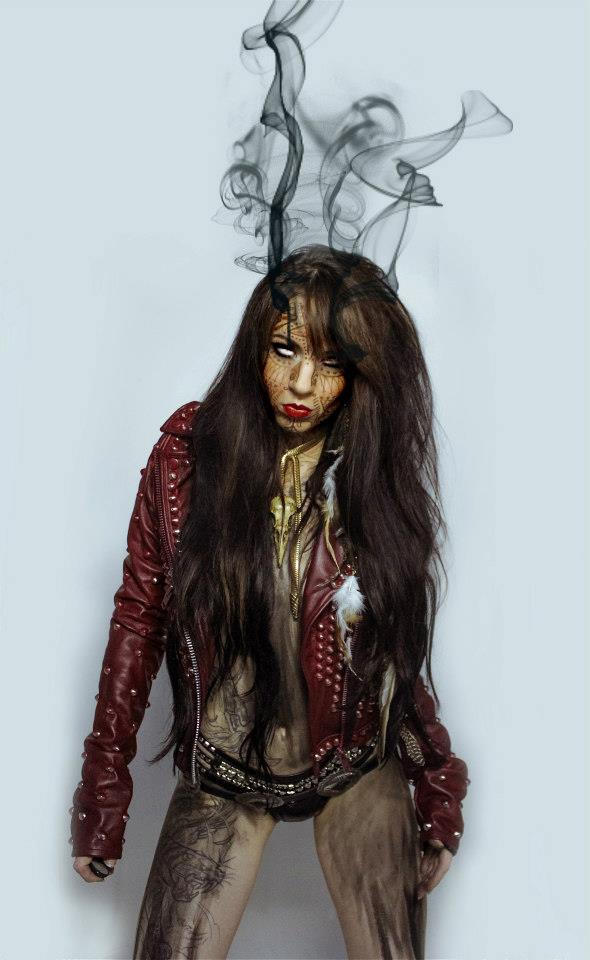 have a TOXIC VISION here